We’re pleased to announce the formal partnership between HubrisOne and Heluss. This is partnership further strengthens our marketplace proposition and allows HubrisOne customers to access affordable blockchain based insurance. We look forward to collaborating and building with the team at Heluss.

Heluss, based in Canada, provides innovative solutions to the insurance industry, transforming how traditional policies work with the use of blockchain technologies, smart contract and AI in claims management.

Its business model is defined by a 40-40-20 rule. Forty percent of premiums are allocated for claims and the reinsurance fund. Any savings are returned to token holders as bonuses, rewards, incentives and other means to increase community engagement. Another 40 percent is tokenised for policyholders in HUT tokens. These funds are kept in a “H-Vault” reserve in the form of physical assets. The remaining 20 percent is allocated for Heluss’ ecosystem operations.”

Jean Pierre Rukebesha added:”Heluss is dedicated to disrupting the insurance industry by tokenizing and gamifying the insurance industry. We are committed to taking insurance back to its roots…Serving community. We plan to start with crypto price protection insurance, personal items insurance, loan and savings insurances and travel. Partnering with HubrisOne will help us focus on our core business while ensuring seamless transactional, multidimensional services to our community and shared marketing efforts.” Free users can try the service but Premium users set the key difference.

WalkyFit – Is an innovative Green Fitness App – a gaming solution used by cryptocurrency enthusiasts, the first App to be considered a “crypto assets utility dispenser” with a brilliant functional concept: a patent-pending, technology, transforming movements into tokens.

We’re excited to be partnering with an innovative company with a strong unique focus on combining fitness with cryptocurrency. We’re going to walk you through the token use case of the HubrisOne token also known as HBRS.

The HBRS token is an integral part tot he HubrisOne eco-system and is needed to access and make the most of the HubrisOne app and platform. 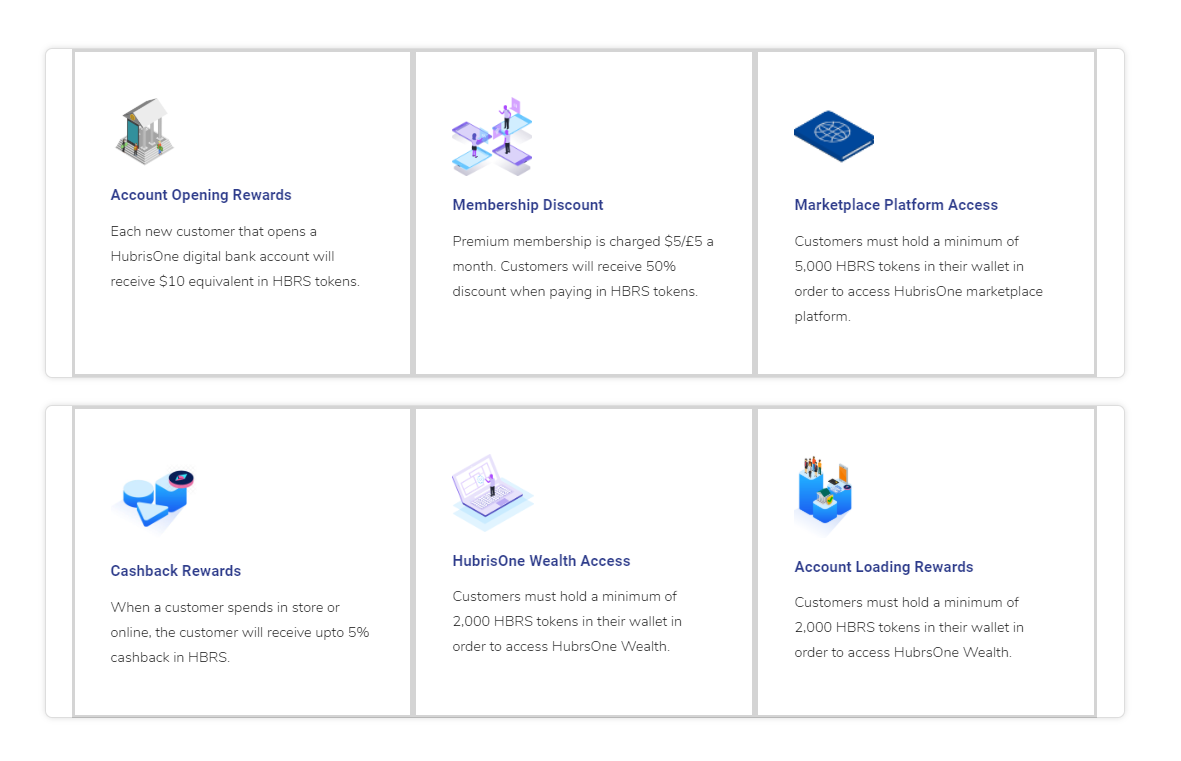 Important: Users of the platform, must hold and pre-specified amount of tokens in their wallet or use the HBRS tokens to receive discounts and access tot he platform. For users that use the tokens to purchase access, these tokens will be used to buy back tokens back to our reserve at market price or burned, thereby reducing supply. Alberto Romero is an enthusiast of open-source projects and in recent years, blockchain ones. He is undoubtedly a proactive advocate of the Stellar Network (@StellarOrg), thus even though he does not work directly for Stellar, he set up the community’s 1st meetup in London on 7th of November, cooperating with Keybox (@TheKeybox), which, has been running a series of popular monthly meetups.

Payments utilising blockchain, no matter in what aspect, have become a wide-spread idea ever since Bitcoin’s hype in 2017. Albeit the first well-known payment use case of blockchain, Bitcoin is notorious for its low speed and high transaction fees. Lots of startups then started to improve this “tps (transaction per second)” performance as well as the unpredictable costs for transactions. Stellar claims to be the best framework for blockchain-based payments — HubrisOne (@HubrisOne) is a good example of a platform using their tech.

Seeing the technology as nascent and early-stage, Keybox applied DLT in a different way — mainly for its security, immutability, territoriality and anonymity.

Alberto started with his presentation on Stellar, by emphasising their strength in terms of speed and cost: Transactions are typically confirmed in 3–5 seconds, and 1 cent will pay for 50,000 transactions. He also listed the diverse asset types that can be issued on Stellar; namely fiat (‘stable coins’), rewards, fixed income, STOs and ICOs, utilities and commodities. Alberto ended the presentation with the historical image below that he saw on a recent trip to Malta:

“Non Aes, Sed Fides” was written on the coin, which means “It’s not the metal, but the trust.”

Ivan Gyimah (@IvanGyimah1) is an ex-Thomson Reuters analyst covering financial and risk sectors. Interestingly, he was also an early investor in Bitcoin. Gyimah co-founded HubrisOne, a payment platform with his brother Tony Gyimah. Ivan explained how the Stellar blockchain works on the HubrisOne’s platform: Instead of waiting days for international transactions through banks, by exchanging through the Stellar network, one can easily send money abroad to a friend within 3~5 seconds. Gyimah showed a demonstration video of the HubrisOne mobile app, which includes other features and products like cryptocurrency-backed loans.

After two presentations came the well-anticipated panel hosted by highly experienced Fintech and Blockchain enthusiast Eric Van der Kleij (@ericvanderkleij), who is also the Chairman of Keybox. Having founded a credit card fraud prevention platform himself back in 1996, Eric has seen the entire payment technology evolution. (He co-founded Adeptra with Martyn Walker, now the CEO of Activeledger (@TheActiveledger), and sold the company to FICO in 2012.)

Eric started with some questions about the technology behind HubrisOne — It turned out that the platform actually used three different technologies combined: Stellar, Ethereum and OmiseGo. “Stellar is a B2B version of Ripple. When we read their whitepaper and powerpoint, it was about consumer and financial inclusion,” said Ivan. Michael from Keybox added: “It’s all about people. At Keybox we care a lot about including people who don’t have a bank account, who are open to the inconvenience and disadvantages of cash, to the digital cash system.”

When asked about how the regulators are facing the new trend of decentralisation, Electra from the Law Boutique thought the regulators were looking from a human-centred perspective too: “They want to create protection and certainties in the market. Unfortunately, Brexit has disrupted a lot of the plans that we had to look more into it.” Speaking of Brexit, Electra, whose firm aims to provide affordable legal advice to startups and SMEs gave an interesting answer: “I haven’t really offered any advice on Brexit because none of the startups have asked me. I don’t think lots of startups are thinking in a proactive way. I think they’re waiting to react.” This could be down to the higher tendency of risks entrepreneurs typically have, or simply as Eric pointed out, companies like Keybox who will be expanding globally perhaps won’t be affected as heavily by Brexit. We are honoured to be featured in Japan’s top crypto app, CoinView with 500k downloads and 80k daily active users.

The information contained herein is a summary of anything described and is incomplete and provided for the convenience of the visitors, readers and registrants; it is subject to change without notice HubrisOne Technologies Ltd (“HubrisOne”), a private limited company incorporated in England and Wales with company number 11529615 and whose registered office is Chynoweth House Blackwater, Apt 24361, Truro, Cornwall, United Kingdom, TR4 8UN